Frances OrtonPosted on January 28, 2018 Posted in News, Reunion No Comments 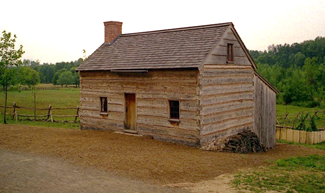 Two hundred years ago, the Smith Family had been driven from their home and had to relocate and rebuild in a new place. More than anyone, the Smiths knew what it meant to be homeless and refugees. We are helping build bunk beds for those down on their luck and refugees so they can sleep with more comfort, in memory of Joseph Sr. and Lucy pulling and building together in 1818.

What would you have given for our Father and Mother Smith to be able to sleep with a roof over their heads?

Today, 200 years later, we have an opportunity to help others with similar difficulty and have Joseph’s family and name known for good. In 2018, in conjunction with Sleep in Heavenly Peace, the Joseph Smith Sr. and Lucy Mack Smith Family Association is honoring their sacrifice and endurance, by building beds for refugee families in the Salt Lake City, Utah area.

At this 200th Anniversary gathering, we will be donating and building bunk beds for refugee children.

Won’t you join us for this seminal event? With your family’s donation for a bunk bed, we can make a difference for hundreds of children, and just as our past gatherings, your good works and Joseph’s name will be broadcast to thousands.

You can learn more about Sleep in Heavenly Peace by watching these links:

Watch for additional Family Association and Reunion details that will be coming soon.

The family in from of the Smith Family Cemetery during the 2016 reunion.
(Photo: Lindsey Orton)

During the program held at the cemetery, Elder Ballard said, “There is no one who has ever lived in my judgement, with the exception of the Savior, who is more entitled to rise up on the day of resurrection in a glorious and beautiful garden. I have always felt deeply that Joseph, Hyrum, Emma, and Father and Mother Smith, Samuel, Don Carlos and other family members will rejoice together on the day of resurrection. They all played important roles at an important time in our history.” Elder Ballard’s full address.

Lachlan Mackay is a member of Community of Christ Council of Twelve and a Trustee of the Joseph Smith Sr. and Lucy Mack Smith Family Foundation. He shared some stories about Lewis C. Bidamon and how Emma met him during the time Lewis was fighting to protect the remaining Latter Day Saints in Nauvoo.

Lach said, “Here is what I appreciate most about Lewis. He was father and parent to the children of the prophet. For David he was the only father he ever knew. Of course, Emma was pregnant when Joseph was killed and David was born 5 ½ months after his father’s death. For raising those children, I will be eternally grateful.” Read more about finally marking Lewis’ grave.

This site uses Akismet to reduce spam. Learn how your comment data is processed.